After releasing a tell-all book and publicly supporting her gay son's political activism, smouldering singer/songwriter Belinda Carlisle is back – with an exclusive London show on 27 May and an eagerly-anticipated new single, Sun, expected later this year. 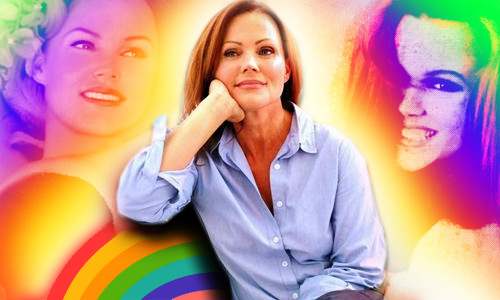 Here, Peter Lloyd fulfills a childhood ambition by chatting to the woman herself...
PP.com: You've just announced a very special show, which fans can be a part of next month. What can people expect which they wouldn't normally get at the average gig?
BC: "Well, there’s going to be all the hits, but I’m going to make it more unusual and put some obscure songs into it. I don’t get much opportunity to do my French material, so I’ll maybe do three or four of Voila!, which is a treat for people because the gigs I have been doing are usually just 30 minutes sets, or shows with lot of different artists on the bill, so they don’t get to see an entire set of mine...You’ll have to excuse me because I have jetlag."

PP.com: Jet-setter. Where did you fly in from?
BC: I’ve just flown from LA – and I’m getting more stuff to go back to LA. We’re going to be there half the year now. I always said I’d never go back, but 20 years later I’m kind of looking forward to it. Although it’s just part time – I don’t think I could do it full time!"

PP.com: As a performer, how daunting is the concept of being so intimate with your fans?
BC: "It’s definitely harder doing a smaller show than a festival or an arena. In those you can get lost, it’s anonymous and the lights are bright – you just kind of lose yourself. In a smaller show people are right there in front of you. It’s two different things. I used to find it more difficult, but now I like doing both."


PP.com: You published your book, Lips Unsealed, which was a big hit in the US – storming into the NY Times Bestseller list. If you were going to update it with a new chapter covering the past two years, what would be in it?
BC: For the past two and a half years I was in India for six months a year. That would be in it because that was an adventure, an amazing part of my life, and probably this whole move back to LA. I always said I’d never go back, but it’s weird, you always end up back where you came from in life."

PP.com: You describe your drug misuse as a manifestation of your hole in the soul. What's your advice for people who also feel like there's something missing?
BC: "The first thing that comes to mind is that my hole in the soul - my under-current of frustration, unhappiness and anger – was kind of taken care of with a really strong spiritual foundation that I live my life from. It’s not religious, it’s spiritual, but I think for me that kind of took care of everything. I grew up being the most non-spiritual person, I hated all that stuff, but round age 40 I started asking questions about where I’d been, where I was going and whether there was something bigger than me. I decided to explore Buddhism, which changed my life. For me Buddhism is more of a philosophy rather than a religion. Anything with too much dogma I find a big turn-off. I love chanting, it was a really good tool for my sobriety, it’s a tool of reflection and looking into yourself."


PP.com: Given your former addictions, did watching Amy Winehouse's decline and death affect you on a personal level?
BC: "That and Whitney Houston. It really easily could’ve been me – and for whatever reason I’m still here. It’s difficult to watch and difficult to observe a family trying to intervene – at the end of the day no one can do anything for the person that’s suffering, they have to want to make the changes themselves."

PP.com: What's your opinion of the music industry now?
BC: "There are some good things that come out of it. Most of it’s a bunch of shit. I think that shows like X-Factor and American Idol have really ruined music and although they might be entertainment it’s kind of dumbed everything down. It used to be that record companies nurtured artists and you could actually have a career, but now it’s just 'let’s see what sticks and make as much money as we can and we’re done'. There’s not a whole lot of interesting things out there for me. To be fair I don’t really go and search for it, but there are things that I hear occasionally that are great and get through the barriers."

PP.com: When you look at some of your contemporaries like Madonna, who's still on the treadmill, how do you feel?
BC: "I feel very uncomfortable to be perfectly honest. I’m like 'Come on lady, slow down – you don’t need to do that anymore. Don’t you wanna have a nice holiday somewhere and like, gain 20 pounds and not fucking care?' Power to her, but to me it reeks of being totally ego-driven. It makes me uncomfortable because she’s my age, she was born the day before me, and I know at this point in my life I do love working, but I also love not working."

PP.com: Any chance of a new Belinda LP?
BC: "I have a single coming out in August in the UK and the fall in the U.S., but an album would take like two years, and I’m not interested in competing. After Voila – I love that album - it would take something really, really good to make me want to record again. This new song came along and they wanted an album, but I said no, so I’m just releasing a single. It’s called Sun, it’s really good. Actually my son found it, but it’s called S-U-N, not S-O-N. It was re-worked by myself and Jane Wiedlin and I’m really excited about it. So, little singles here and there, yes – but albums, no, I’m not interested."

PP.com: Your back catalogue has some incredible highs. Out of all the singles you released, what are your top three?
BC: Summer Rain, Mad About You and Circle in the Sand.


PP.com: You once worked with George Harrison, who played on one of your tracks. How much did that experience mean to you then and how much does it mean to you now?
BC: "He was always my favourite Beatle – he was always the cutest. I didn’t actually have a chance to work with him in the studio, because we were in France and he was in London, so he just put his guitar down. To actually have George Harrison playing on a song was just... I still can’t believe it, actually. He didn’t do that for other people. It was nice too because, after he passed away, his widow sent me a message through a mutual friend to make sure that I knew that he really loved my voice, and that’s why he did it. Of course that’s very, very flattering."


PP.com: Your son is gay and politically active. Does he want a future in American politics?
BC: "I think he could definitely be one of those people who can make a difference. He’s very passionate, super-intelligent - much smarter than me - and he’s on it, he’s in there and he has a big future. I think he will go into politics. I think in the next ten years you’ll be hearing a lot about him."

PP.com: One of our favourite Belinda stories is you going to a party and waking up owning a racehorse. What other rock 'n’ roll tales can you tell us?
BC: "That was something. That was one of the top stories. Hitchhiking on acid from LA to Pismo Beach was another. It was at 11 o’clock at night and I got there at like five in the morning. I kept the racehorse for about two years before I sold it and I kind of got into it. I was going to the track and the whole betting thing and never being sober – I was always off my trolley."

PP.com: Finally, I know you're a big Stephan Zweig fan. If you could recommend any other book to our PinkPaper.com readers, what would it be?
BC: "Beware of Pity is my favourite book of all, all time. Everybody I’ve recommended that book to like totally freaks out when they read it, but he also wrote an incredible biography of Marie Antoinette, which is amazing. Find it: it'll blow your mind."

Belinda will perform an excluisve, one-off show at London's Metropolis Studios on 27 May. Filmed for TV and DVD, it allows fans to see Belinda as they never will again – in a studio/club environment reminiscent of the Marquee and famous TV shows like Ready Steady Go!

All guests are part of the filmed show and VIP treatment starts the moment they arrive at Metropolis Studios. Complimentary drinks are provided throughout the evening, and fans will receive a personal pass and lanyard upon arrival.

They will be ushered into Metropolis’ famous Studio A where Belinda Carlisle will perform a blistering concert in a tightly-packed club atmosphere. After show will be in Metropolis’ main bar with Belinda joining the party for a meet and greet and photographs.

A photographer will be shooting all evening from arrival to end and these shots are loaded on line for VIP guests to download hi-res images at their discretion.
Buy your ticket here
2012 Belinda Carlisle INTERVIEW Pink Paper